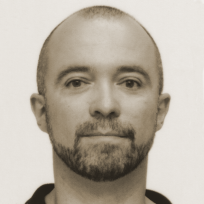 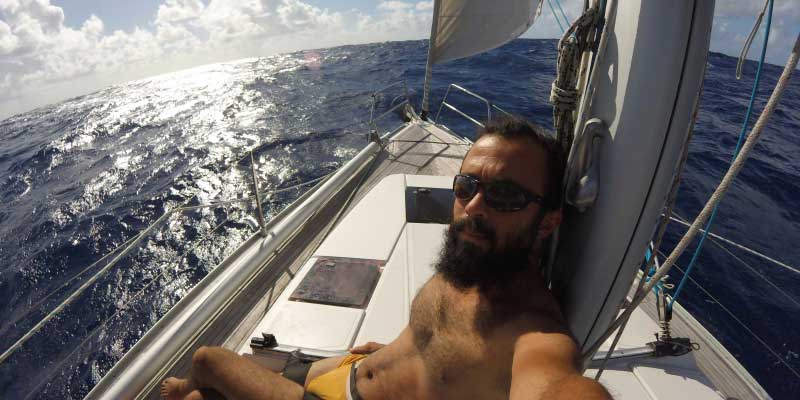 Started making good use of the sat-phone. Some revealing information from Bob MacDavitt’s WeatherGram. ITCZ is much lower than normal, which answers the abnormal head winds experienced and abnormally high amount of rain spells.

On sat-phone’s Saildocs, I also found a little trick to get information on currents, which will allow us to be sitting on the South Equatorial Current, tailing a 2.7 knot flow all the way to the Marquesas longitude and possibly averaging a mind-blowing 250 miles per day. Left to wonder if the old heart can take such speeds.

Some birds, which my ignorance could not identify, were flying over the top and playing catch with the mast top, much like skydivers do at swooping closer and closer to a fixed object attempting to touch its feet on a solid fixture.

The deck this morning, was covered in long perished squids, which propped a feeling in me to return them to the ocean so they could be digested by some other creature. The noble gesture, faced with the thought of getting wet by the odd wave, delivered a coward’s excuse of unnecessary risk to safety. A cat in its essence.

Wind died briefly during the day and backed. Better angle was achieved through the evening but it is supposed to lighten up and veer to 220T, which will be dreadful for us. During the calmer movements of the lulls, I took the time to write a few friends and then retired to some entertainment, an audio book by Neil DeGrasse Tyson: “Astrophysics for people in a hurry”. Mind-bogging fantastic!

Winds eventually returned and unlike the forecast, it favored our heading and kept us at 265T, perfect at this stage.

A morning that required the scent of coffee to wake up the dead. Straight black, nothing added except plain Maria cookies. Utter glory! For the first time on the journey, I turned the stereo on for the morning ritual. Rodriguez’s philosophical melancholy moves me like very few musicians could ever attempt.

Body is on decay and needs addressing. Bowel movements have been fairly regular but the urinary bit is shocking. The immune system must be hyperactive, as every foreign object in my body seems to be rejected. A catheter that could be in for 3 months, now seems in need of replace every 3 days, or be doomed to cultivate a “reef” of E.Coli. , just as in comparison to barnacles to Little Minx’s hull.

The winds favored us even more today, on a 255T and that is cracked sheets! Great speed at much more comfortable angle towards favorable headings.

Another milestone was crossing the 90 degree meridian of longitude. A quarter of the planet has been ridden since England’s Greenwich, but still a long way to go before we complete 184 degrees total at our destiny, making it more than half of the world away, and that is just in longitude!

At first glance, the sun was shinning right through the top hatch and wind indicator showed beam on winds. Could it be true and the old pal trade winds decided to join forces???

Sails were well trimmed but still got some vibration from the slugless part of the mainsail where that batten had flown off from. Better be prudent and fix it now than wait for a time when it’s impossible. I visioned my friend Fred Jeanes giving me a lecture, if I was to let my guard down. Conditions were not perfect but doable, so I pulled out the climbing harness and gri-gri from the locker and arranged the whole contraption onto spinnaker topping lift.

Setting Little Minx on a closed hauled course, I slacked the boom and held it down with the preventer as I doused the mainsail. She continued on sailing at around 3-4 knots with a much steadier motion than otherwise just drifting with no canvas up, at the mercy of the swell. My arms, from so much use at this stage, have its veins pop out like strands of rigging wire at the minimum effort, so I did the climbing on rope alone and only took the slack on the gri-gri at a height of 3 meters(10 feet) from deck to perform the repair, which took very little time before we set the good boat back on its desired course.

Not long afterwards, a massive trawler caught the attention on the horizon, around 3 miles away doing its nasty job at depleting the ocean floors of any life. Surprised the AIS didn’t pick it up, being set at 9 miles. Hmmm, a ship that massive without AIS on? It is bound to be doing illegal fishing, specially so close to Galapagos protected reserve.

The indignant mind, pondered on what action should be taken if ever stumbled upon a liferaft adrift, full of the same fishermen.Followed the thought of what should a bunch of fishermen should do, if ever stumbled upon a cripple floating in a liferaft in the middle of no-where. The aporia of never finding justice and truth. Justice perhaps is unfair, and fairness perhaps will never be the truth. We are all drowning in our own stupidity.

Anyway, dinner is soaking, a one pot jumbo of lentils and brown rice, a delightful reward for getting better with the catheter issues.

Another day at sea comes to an end, slowly drifting asleep starring out the hatch, seeing the mast-top light being played upon by those birds. Kids of the sea, just playing around with their imagination and whatever objects get thrown their way. Those kids!

Never count with the chicks before eggs hatch. The E.Coli. nemesis is throwing a hell-bender party in my bladder, and I was not invited.

Upon going to the cockpit, traces of bird poo everywhere and looting to the remaining potatoes and onions that are in a basket by the companion way. Ahhh, those kids!

A calm and overcast day in its entirety, full mainsail with one mild tack to the south to maintain westward heading. The tacks are still necessary from time to time, to reach the desired latitude of 1 degree north. In some tranquility, I delved into the study of “time” through my philosophical library. Time seems irrelevant out here but any sort of premise renders the counting of progress. Augustine and Pascal keep me twirling the long protruding beard, at this stage encrusted in sea salt.

Overcast skies continue and “I ain’t seen the sunshine since I don’t know when”. To complain is irrelevantly meaningless, as Little Minx is plowing through at phenomenal speeds but to be at 100W longitude and still cracked sheets is abnormal for these parts of the ocean.

The afternoons have become somewhat a time for study. Today I am revising Part III of Spinoza’s Ethics in dichotomy with my own views of the affects. When I ran out of brain cells to deal with its complexities, attempted dealing with something more technical with mathematical truth, Einstein’s General Relativity. Must have lasted 20 minutes, maximum!

Last can of a dozen cokes gets consumed, something has of course not gone well according to plan. “Balance!”, the cliche of a foolish mind reverberates without thought. A being with the power to deliberate over its own affairs will always favor its immediate desires. Discipline is not even true when life is at stake, we all have a threshold and will give up or succumb to our desires, even if it is desire to give all up. Desire however, will not bring back the Cokes which I might need if a fierce gale is to be dealt with heading down on the last leg to NZ. May I not perish, for not having steadily kept the Coca-Cola Company in business for the past 12 years.

No gale, or cyclone would ever last longer than 4 days, though the lingering situation for the past 14 days seem not to apply to this particular category.

When the sun is at my zenith, the heat increases and winds tend to die down with the scorching heat. Life down below becomes somewhat unbearable and Little Minx always demands more canvas, as I usually reef her by night fall, in case of getting caught by a party-crashing rain squall. Raising that heavy mainsail exactly at the hottest time of day, ought to break a heavy sweat. The irony of all, is a sticker “Go electric” on all of her winches, which still rubs on my face every time I get to the grinding.

At the end of the afternoon, the winds nearly died and by early evening, it freshened up to a 13-15 knots. Reef or not reef? Slightly overpowered, we boasted an 8 to 9 knots on the log, 11-12 knots on the GPS. Thinking that this wind pocket would be short lived, I sat in the cockpit waiting, just in case. Mesmerizing the beauty of the wake trailed behind with a mild rooster tail, I contemplated how much nature in this environment influenced my thoughts in the subject of time.

Regardless, my thoughts were correct and the winds eventually calmed down to a “tenner”. In the steadiness of wind, decided to go to bed with all canvas up, as there were not traces in the sky of any sort of surprises in the imminent horizon. Far from it, at 3 am, the winds completely died. Cup of tea for a change and winds returned as soon as I was finished. Back on course, back to bed. Life at sea.

Mid morning, winds piped up just like the day before. Same laziness contemplated and same approach was used. This time however, reefing was required an hour later.

– “Such a fair weather sailor. Afraid of seeing a little bit of action for a change?” – murmured a machievellic voice on my shoulder.

– “No thanks, I’ll strive to keep this darling in one piece all the way to NZ, besides, look at the log, we are still screaming at comfortable 8 knots.” – in prevailing retaliation.

And flying we were. During the noon fix on the logbook, I nearly felt backwards at the revelation of our progress: 216 nautical miles in the previous 24 hours(noon to noon). That’s 9 knots of average speed. Jubilant jumps of joy were desired, just like Captain Cook aboard the Endeavor doing 4.5 knots. But yeah nah, never mind.

An uneventful afternoon down below catching up with my notes to manifest this blog online. Towards sunset, a funny orange glow ubiquitously filled all hatches, so I promptly dashed to the cockpit. The image ahead of us made me chuckle in uncontrollable delight: at the edge of the horizon, a defined line of clear skies dominated existence from as far south to as far north, as one could see. At this point of the game, it’s hard to keep hopes up, but I guess tomorrow, it may finally be time for the so dreamed of, tradewinds!